Get an education, not the Confederate myth 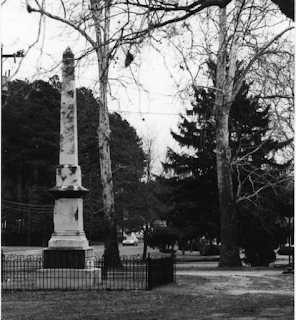 Confederate monument in Lancaster Court House, Virginia, from Gerald L. Cooper’s book,
"On Scholarship – From An Empty Room at Princeton.” —Photo by author.


As I was growing up in a simple house in the tiny town of Lancaster Court House, Virginia, from 1935 to 1950, I could not avoid a daily viewing of the Confederate monument across the road, a veritable landmark beside Virginia route 3. The monument stood tall in the midst of an iron-fenced enclosure, about forty yards west of my home, just across state-designated “Historyland Highway,” which links the Northern Neck’s historic sites — King Carter’s Christ Church, George Washington’s Wakefield and the Lees’ Stratford Hall — to Richmond, Fredericksburg, Alexandria and Washington.

In my pre-teen years, I did not spend my time contemplating that marble obelisk, but I knew it was there, looming as a great gray eminence even in bright sunshine. Eventually I gained an understanding of what it stood for, with the help of my schoolteacher mother. She also gave me an idea of what it didn’t represent—at least in our household. She had a friend over in Corrotoman who would genuflect before the monument, and any time she encountered a portrait of Robert E. Lee. (Corrotoman is also a peninsula derived from that river, which was named for the local Native American tribe; “cor-ro-toe'-man.")

“My dad’s from Neola, Iowa,” I used to say, when budding southern patriots at elementary school got me into a corner, defending their Confederate cause. My dad had died by the time I was ten, of a heart attack in 1945, so I had to find new ways to defend myself. That too was an early opportunity to be different.

My mother grew up in the lower Northern Neck — first Northumberland and then offshoot Lancaster County. She was a member of the United Daughters of the Confederacy (UDC). One of her responsibilities as a member and recording secretary was placing small Confederate flags around the monument on Memorial Day or Decoration Day, as it was called in the 1940s. She had a supply of Confederate flags, each measuring about 15 x 15 inches, mounted on three-foot wooden, quarter-inch staffs. She would put the flags on display for the designated day each year by pushing the staffs into the ground at each corner of the monument’s enclosure, outside the surrounding iron fence.

More than once in my early years I absconded with a flag from Mom's storage closet to show off to a friend; I got caught, and was punished for the trespass. “The flags aren’t expensive or sacred,” my mom said, “but they are not playthings, and they belong to the UDC, not us.”

The Confederate monument had been erected in 1872 to honor the men of Lancaster who had died for the Southern cause. The Ladies Memorial Association of Lancaster County had raised funds for construction of the monument. The names of the 111 local men who gave their lives in the military service of the Confederate States of America (CSA) were engraved in the white marble that forms the upper section of the obelisk. These fallen warriors’ names were at first the only honorees on the monument.

In a pictorial history titled, "Virginia’s Historic Courthouses," I learned that Lancaster was the first county in Virginia to erect a Confederate monument after the war, and also the last county to complete a new courthouse,  before the Civil War in 1861.

Not long after the monument was finished, the names of 346 survivors were also added to the memorial. Three bronze plaques at the base display the names of one hundred or so Lancaster County men who served in the Civil War and lived to come home—including my grandfather. These men were designated “Survivors of the War of 1861-1865” on the plaques. This statement conformed to the prevailing notion in the South that the term Civil War was unacceptable in describing the conflict.

Created by white Southerners to rationalize the South’s bitter defeat, the so-called “Lost Cause” movement reached its zenith in the 1870s. Lost cause advocates used such words as noble, righteous, and chivalrous to describe aspects of the Confederacy in the hope of eradicating the pain of defeat and the ignominy of Reconstruction.

Thus the Confederate monument’s revisionist symbolism in history became a fact of life in Lancaster County by the time I was born, in 1935 — just 70 years after Lee’s surrender at Appomattox in 1865.

[Editor's note: In May, 2017 I have revised this article slightly and have presented it here again, in view of the recent renewal of interest in Confederate monuments and other icons of the Civil War.]
Posted by GerryCooper at Wednesday, May 10, 2017 1 comment:

College, cheaper than you think

Posted by GerryCooper at Wednesday, May 10, 2017 No comments:

Under Baker Duncan, Woodberry Forest School began to be managed as a modern business

Under the leadership of its fourth headmaster, A. Baker Duncan, Woodberry Forest School came to be managed as a modern business, beginning in the mid-1960s. Innovations included investing short-term surplus funds (from tuitions and fundraising) in higher-yielding, safe investments through the Common Fund and other safe sources; setting up lines of credit (for capital projects) favorable to the School based on its historic balances and fundraising ability; and generally leveraging the School's strong financial position — to the benefit of Woodberry Forest, rather than to the profit of small, local banks, where short-term surplus funds had formerly languished.


It was enlightened moves and policies such as these which changed the financial outlook at Woodberry Forest, and led to future prosperity. If change had not occurred, the school would not have (a) protected and expanded the value of its existing assets, especially by retaining professional investment counsel; (b) gained the confidence of its wealthier constituents by using such counsel and other wise business management practices, and (c) created a climate and performance history to attract endowment gifts and grants that would eventually exceed $250 million by 2012.

Many nonprofit organizations pay lip service to such cliches as frugal spending, long-range planning, and wise investment. At Woodberry Forest School, beginning in the mid 1960s, the trustees and administration began to give measurable emphasis to the school's motto: "A posse ad esse" - From potential into fulfillment. Substantial change was evident, both in the academic areas and in the financial management of the school.

Woodberry's administration began to measure and compare its performance statistics with schools of similar student enrollments, size of faculty, endowments, financial aid and operating budgets. These friendly-competitor comparable schools were located primarily in New England, though Woodberry's oldest rival, Episcopal High School in Alexandria, was always in the mix.

Baker Duncan had brought to Woodberry's headmaster position the unique qualities of business experience (in his native Texas), his high-level formal education (from Woodberry, Yale and U. of Texas-Austin), his indomitable personal drive, and a full commitment to Woodberry's leadership among national independent schools.

It was my privilege to be hired by Baker in 1966, and to serve with the Woodberry Forest faculty and administration, as well as to be secretary of its board of trustees, 1967-77. These opportunities provided remarkable experiences for me and constituted a high-point of my career in education. I have attempted to capture some of these experiences in my book,  On Scholarship – From An Empty Room at Princeton, which I published in 2008.

Thanks to Baker Duncan, Woodberry Forest was — and still is — a tremendous learning place for hundreds of students, and for many faculty members who come to teach and are open to learn, as well. 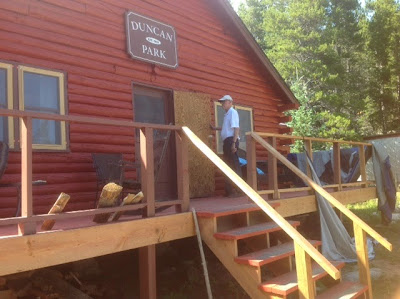 Here is a photo of former Headmaster, A. Baker Duncan, taken in August 2014 near Boulder, Colorado, where the Duncan family have created a summer camp for young people, operated by the Episcopal Diocese of Southwest Texas, of San Antonio.

Posted by GerryCooper at Friday, March 20, 2015 No comments:

Even incidental undergraduate students such as I were aware that factions existed within the English department – and perhaps among the entire University administration – and were in disagreement over the value of Mr. Faulkner’s presence and usefulness on the Grounds. Former professor of English Joseph Blotner has captured much of the color, along with some of the political issues, of that era at the University in his autobiographical work, An Unexpected Life, published in 2005. The chapter titled “The University and Mr. Faulkner” might more accurately be titled “The Faulkner Era at the University of Virginia.”

Despite the politics and controversy, William Faulkner had a remarkable impact in the brief period of his presence in Charlottesville. His time on the Grounds might be compared to the presence of Edgar Allan Poe, who was enrolled for one academic year, beginning February 1, 1826, in the University’s second session of operation.
The University of Virginia’s first president, Edwin A. Alderman, wrote in 1925 a convincing essay on Edgar Allan Poe’s tenure as a student. He describes how Poe, despite a short stay and a less than exemplary lifestyle, had symbolized the presence of a “world poet” at the University. Alderman concludes that Poe “has contributed an irreducible total of good to the spirit which men breathe [at the University] as well as a wide fame to his alma mater that will outlive all disaster, or change, or ill-fortune.” Alderman defines the effect that a true artistic talent may have upon a community of scholars – even when that presence is brief and controversial. (See footnote.)
Blotner and others have reported that President Colgate Darden was lukewarm to Faulkner’s writer-in-residence status because he questioned that the University needed the national attention that Faulkner’s visit would bring. But from my point of view, William Faulkner’s presence on the grounds had the effect of opening a window onto a larger world for UVA students in the late 1950s. It is difficult for students in the 21st century to imagine what a great gulf existed between the Grounds and the larger worlds of government, commerce and especially the arts, before the advent of mass communications. No national media coverage originated in Charlottesville, and even Washington, D.C. offered little or no live theatre, at least until the Kennedy Center opened in 1971. Thus to have a person of international stature in the world of letters – a Nobel laureate – walking the Grounds daily over a period of months and years demonstrated that the University of Virginia had not lost sight of the world-class ambitions of its founder.
I’ve had an enduring interest in the University of Virginia ever since I arrived on the Grounds some fifty-three years ago as a “transfer” from another college. Perhaps that’s why I view the University from a different perspective than does the typical alumnus of any era before the 1970s. I have devoted a chapter in my ebook to the University of today, titled “Leading to Diversity,” highlighting the changes that I see as having occurred under the leadership of President John T. Casteen III.
I am happy to observe that gone are the days of a stereotyped faculty and student body, and of a laissez faire attitude toward diverse students that I experienced when I attended in the 1950s. As Mr. Jefferson the Francophile might have said, Vive la difference!
Gerald L. Cooper divided his 43-year career as an administrator, counselor and teacher among four preparatory schools, two colleges, and finally as executive director of a college access program [501 (c) (3)] that served ten public high schools in Norfolk, Portsmouth, and Virginia Beach. This essay derives from his book, On Scholarship – From An Empty Room at Princeton, now in a limited print edition at Amazon.com; also available in PDF format by contacting Cooper.

In On Scholarship Cooper describes his personal experiences with financial aid: receiving it, granting it, fundraising for it, and finding it for needy students.